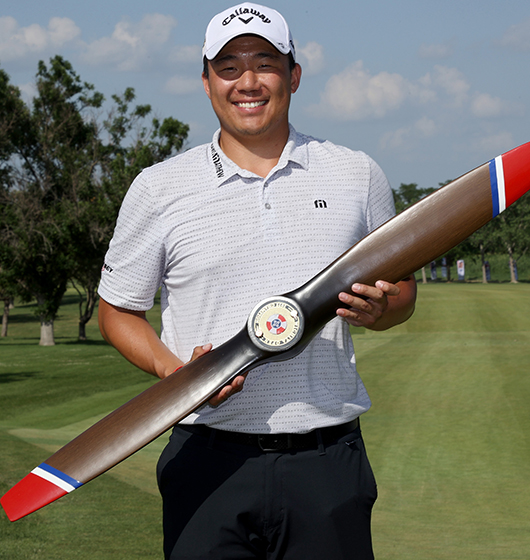 WICHITA, Kansas – The Wichita Open Benefitting KU Wichita Pediatrics has been on the Korn Ferry Tour schedule since its establishment in 1990 and was played for the 33rd time this week, but this historic event had never seen anything like the victorious week Norman Xiong capped off Sunday evening.

Xiong, who began the week without status on a PGA TOUR-sanctioned circuit and Monday qualified into the tournament, posted a final-round 7-under 63 and totaled a 26-under 254, tying the second-lowest 72-hole score in Korn Ferry Tour history. The only lower 72-hole total came from Stephan Jaeger, who shot a 12-under 58 en route to a 30-under 250 at the 2016 Ellie Mae Classic at TPC Stonebrae. Xiong posted the remarkable winning total despite a double bogey at the par-4 18th Sunday.

Xiong finished five strokes clear of Kevin Roy, who settled for solo-second even as he tied the previous 72-hole tournament scoring record of 21-under 259 set by Aaron Wise in 2017. While Xiong and Wise were not teammates at the University of Oregon (they were two years apart), both turned professional following their sophomore seasons and won the Wichita Open by a tournament-record five strokes.

“I really don’t know how I’m feeling just because I didn’t really expect to be here,” Xiong said. “I just knew I couldn’t really let up today. I think that just shows how tough it is out here, and I think you can only recognize how much of a battle it is for all these players out here. It’s a really tough sport.”

Xiong started the final round at 19-under par and had a goal of reaching 22-under. After a birdie-eagle-birdie stretch from Nos. 2-4, Xiong needed a new goal, so he turned his sights to the low round of the day, a 10-under 60 by Justin Suh which broke the tournament’s 18-hole scoring record and Crestview Country Club course record.

“I just tried my best to get there and fell short on the last hole, kind of choked it, but got the win,” Xiong said. “A lot of things just went my way. I got a lot of good breaks, a lot of putts dropped. It’s kind of what it takes out here to win, to have it be your week and have everything go your way.”

Originally from Tamuning, Guam, Xiong moved to San Diego, California with his mother, Jing, and uncle, James Xiong, at age 6. Xiong was a dedicated participant at First Tee of San Diego and blossomed into a decorated junior golfer, garnering AJGA All-America Second Team honors in 2014 and 2015, followed by a first-team laurel in 2016.

Xiong made his way to Oregon, where he enjoyed immediate success. In addition to being the 2017 National Freshman of the Year, Xiong and teammate Wyndham Clark, now a PGA TOUR member, helped Oregon win the 2017 Pac-12 Championship. Later that summer, Xiong defeated Doc Redman in the title match of the 2017 Western Amateur Championship, joining a list of past champions headlined by Tiger Woods. Xiong also played on the 2017 Walker Cup and Arnold Palmer Cup teams, competing alongside the likes of Sam Burns, Collin Morikawa, Scottie Scheffler, and Will Zalatoris.

After the 2018 NCAA Championships, Xiong, 19 at the time, turned professional and made five PGA TOUR starts via sponsor exemptions but missed the cut each time. It appeared as though the tough stretch was an aberration, as Xiong shared the 36-hole lead at the 2018 Sanderson Farms Championship and eventually finished T26. Roughly a month later, Xiong earned Korn Ferry Tour membership for the 2019 season with a runner-up finish at Final Stage of its Qualifying Tournament.

As a rookie on the Korn Ferry Tour, Xiong racked up 15 missed cuts in 21 starts and fell back to the Korn Ferry Tour Qualifying Tournament. At Second Stage, Xiong finished T69 among the 72 players who finished all four rounds and no longer had membership. Sunday evening, Xiong referred to it as the low point of his last three years.

From the start of 2020 through last week, Xiong made seven PGA TOUR-sanctioned starts. Xiong Monday qualified into two PGA TOUR and Korn Ferry Tour events, missing the cut in all four starts, and briefly held status on PGA TOUR Canada, where he recorded a top-10 in three starts last year.

In an interview with Golf.com last year, Xiong felt he could write a book about all that has changed since he turned professional as a college superstar.

“I guess this concludes Chapter 1,” Xiong said following his win Sunday. “I feel so much different than I did when I was out here last year, a few years ago.”

The next chapter for Xiong begins with the Live and Work in Maine Open. The win not only put Xiong at No. 34 on the Korn Ferry Tour Regular Season Points List, it earned him fully exempt status for the remainder of the season. Shortly after the win, Xiong committed to next week’s field.

A PGA TOUR card went from practically out of sight to top of mind for 23-year-old Norman Xiong.

And another one! Welcome Scott Schneider Law Firm

Welcome to a great community leader and our newest